The royal garden at Wilanów – an EBTS introduction

The restoration works of the garden begun in 1942 and was led by Professor Gerard Ciolek (known as the father of historic garden restorations in Poland). His work was interrupted in 1944 because of the Warsaw Uprising after which more than half of Warsaw didn’t exist, but they restarted two years later. In 1962, the result of the restoration work was destroyed by some radical decisions taken by a former director of the museum that was in the palace. The decision was to cover all the paths inside the garden with an asphalt to make the 1962 visit of the General Secretary of the Soviet Union, Leonid Brezniew as comfortable as possible. This decision and others taken in the 1960’s and 1970’s was the beginning of a serious decline in garden’s condition. 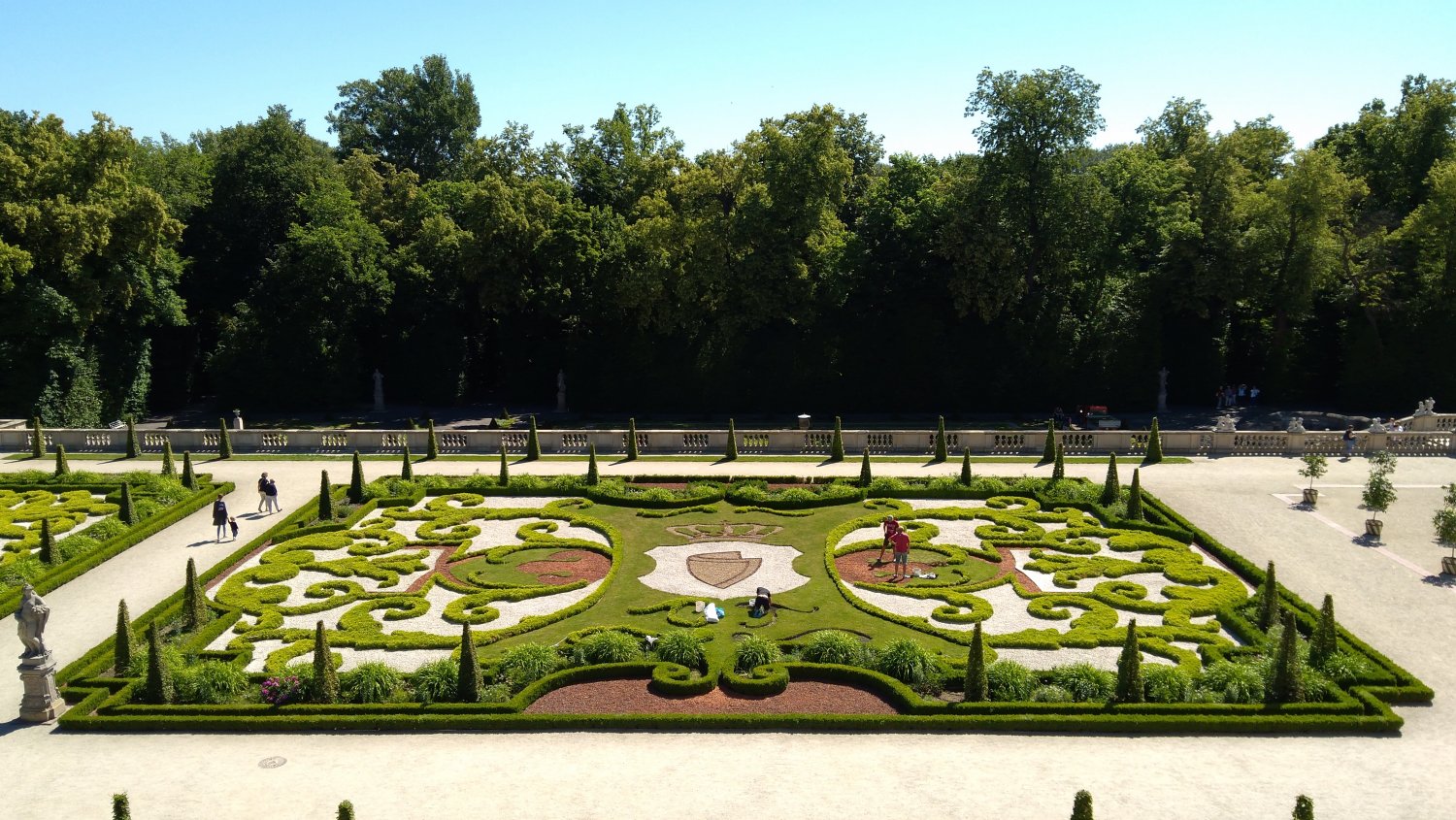 A new chapter in the history of the Wilanów garden’s restoration begun in 2009 and continued through to 2012. This covered the surrounding areas of the main building like the eclectic north garden, the upper baroque garden, the neo-renaissance flower garden and the Palace’s foreground were all fully restored. In the same way the restoration of the baroque gardens at Het Loo (1970-1984), Hampton Court (1992-1995) and Bialystok (2007-2011) were made possible, the restoration of the baroque garden at Wilanów also used evidence from the archeological excavations. The royal garden at Wilanów are now enriched by the geometric, ornamental gardens that disappeared at the turn of 18 and 19 century and their historically documented topiary was reintroduced.

The garden at the Wilanów palace (Warsaw, Poland) surrounds the late 17 century villa of the polish king, Jan III Sobieski. Created as a royal summer residence in 1682 it was one of the favorite places for the King and his family. The garden was originally created as a fine example of the European baroque gardens referring to the Italian heritage of garden art. Changing its form through the 18 century, it was developed by the subsequent owners of the estate and their gardeners. The most significant changes in the baroque era of the royal garden at Wilanów were financed and initiated by such personalities as Elzbieta Sieniawska, polish-saxon king August II the Strong, Maria Zofia Czartoryska and Izabela Lubomirska. The duchess Izabela Lubomirska transformed the tiny 17 century garden into the vast piece of garden art containing not only the highest baroque ornamental forms but also one of the very first English parks in Poland.

At the turn of 18 and 19 century, Count Stanislaw Kostka-Potocki came back from his Grand Tour of Europe and decided to transform the garden in the style of Lancelot ‘Capability’ Brown’s creation at Blenheim (which was visited by Stanislaw Potocki). This decision meant the garden was extended to 120 hectares with a picturesque park formed as a waterside landscape divided by an artificial, so-called English river.

Since the first half of the 19 century the garden has been affected by the destructive forces of nature and historical turmoil. Grand floods, hurricanes, civil and military uprisings, all have affected the condition of the garden. The great destruction came in 1939-1944 when about half was destroyed as a result of military actions, as well as the local community who treated the garden as a source of food, firewood and building material. However, the palace and other buildings (except the Orangery, which burnt down in 1939) survived the war almost untouched.

The upper baroque garden (9,516m2) contains a garden salon that refers to its shape from the turn of 17 and 18 century. The garden is located on a so-called Royal Axis on a terrace supported by the grand retaining wall that was raised up in the late 17 century. There are twelve embroidery parterres with ornaments are made out of: broken ceramics and marble, lawns and box ornaments. They are framed with a border that is lined with box hedging (Buxus sempervirens). In the central axis there is a lane of 146 formed hornbeams (Carpinus betulus). The royal garden at Wilanów was well known in the 17 and 18 century for its hornbeam’s topiary shaped in the form of very narrow pyramids. The box embroidery was planted with Buxus sempervirens ‘Herrenhausen’. Its light yellow-green colour provides a good contrast with the broken ceramics and a marble background of the parterre. The embroidery of the central four parterres with the King Jan III coat of arms refers to the garden parterres of at his residence in Zolkiew (Жовква) in what is now, Ukraine. The proportions of the main parterres and their layout was confirmed during the archeological excavation.  The number of box plants in the upper baroque garden varies between 60 to70 thousand pieces. Altogether, the box hedges and embroidery total 4.5 km’s.

The central part of the garden salon is the main place for the citrus trees display. These are cultivated in wooden, oak planters painted in a diagonal white-green stripes. These are an historically accurate form of decoration found in the garden at Wilanów (recorded from the late 17 century to the end of an 18 century). These planters were reconstructed in 2016 and their number is still growing (together with the number of exotic plants from the collection that has been under the reconstruction since 2015). The restoration of the upper baroque garden is still an ongoing process. It is worth saying and being honest that a few, technological and design solutions that were chosen between 2009-2012 weren’t the best (I’ll talk more about the perspectives of current and further restoration works in the upper baroque garden in a separate article). 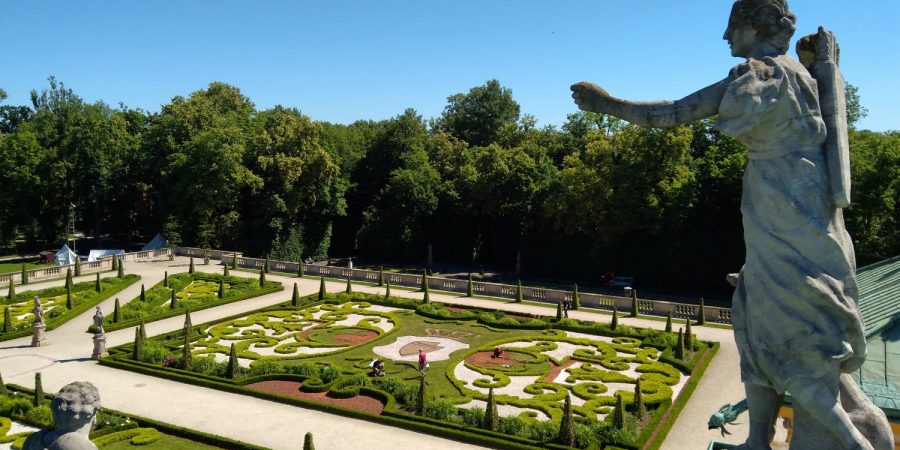 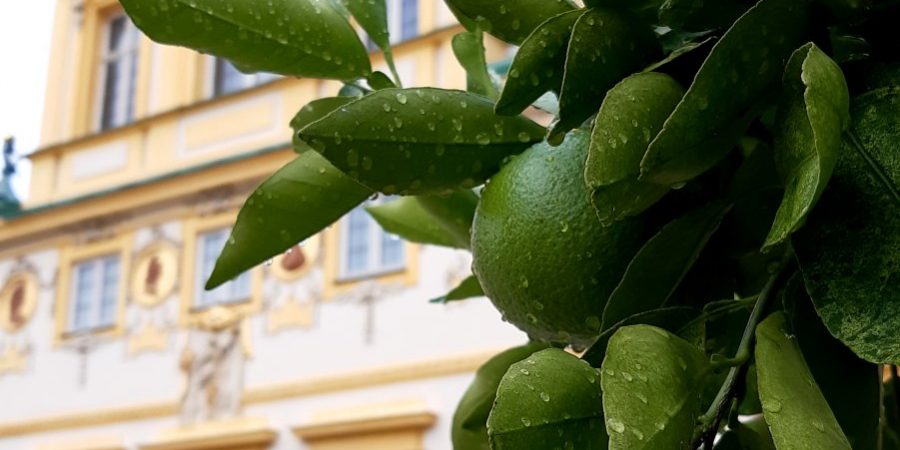 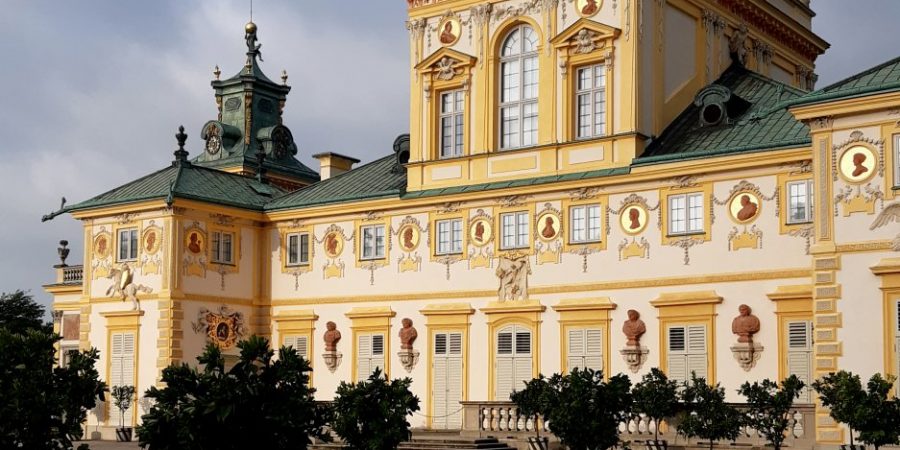 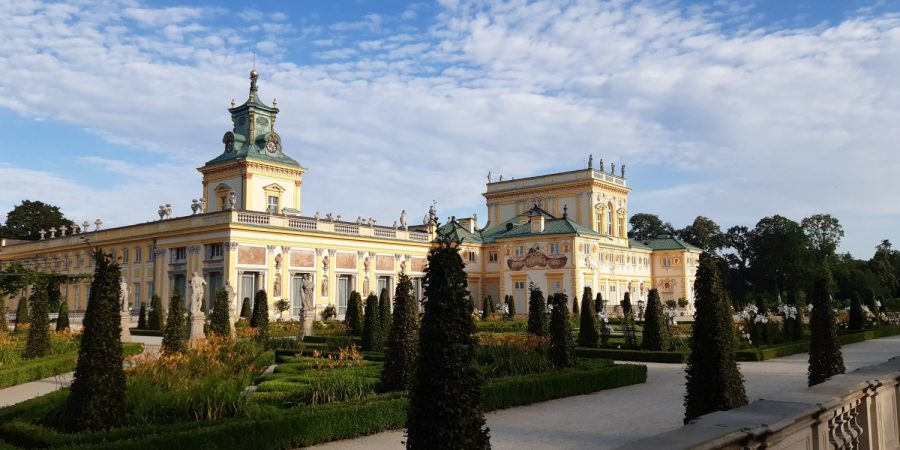 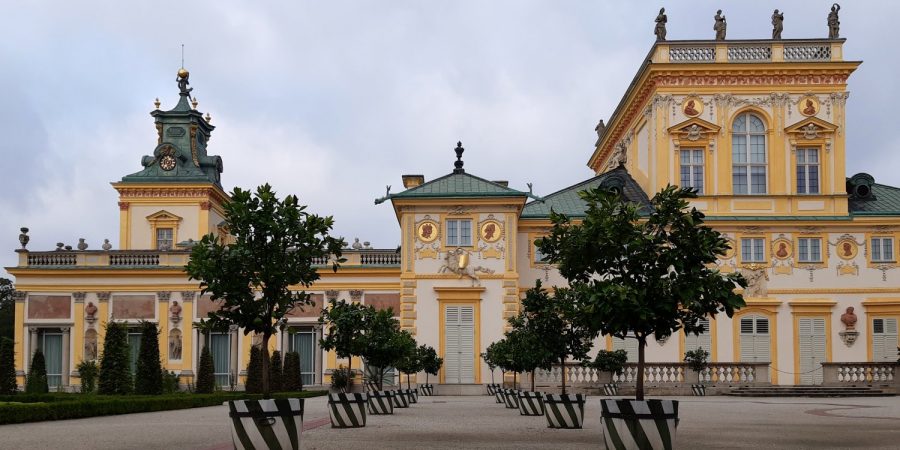 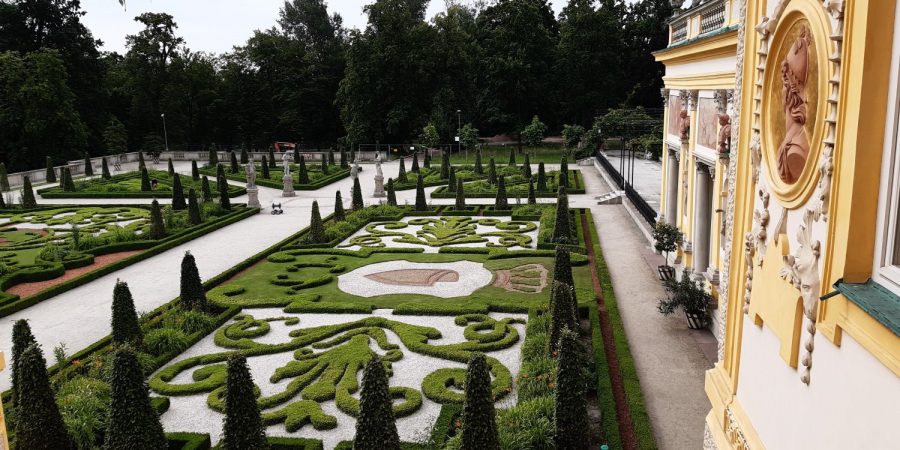 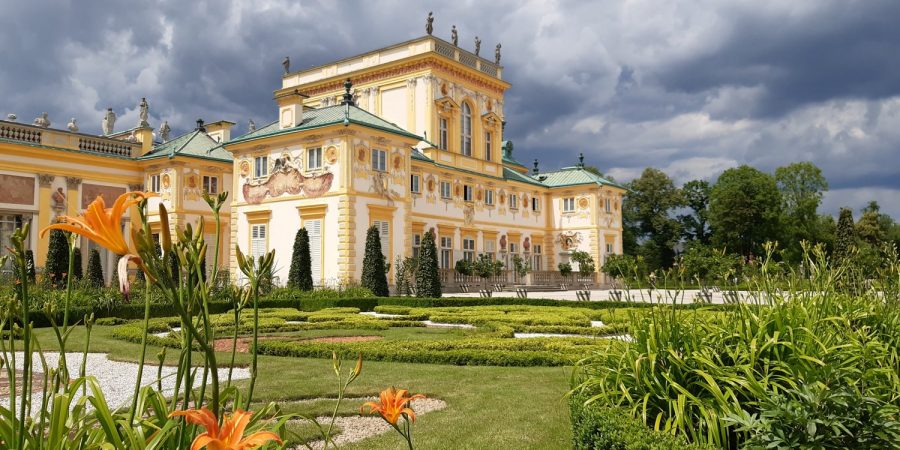 Another garden at Wilanów, that was restored in 2009-2012, in which the box hedges (Buxus sempervirens) strengthen its composition is the Southern Garden (2,475 m2). The former flower garden in Wilanów was designed by Bolesław Podczaszyński in 1855-1856 for August and Aleksandra Potocki and took the place of an 18th century baroque parterre. The layout of the garden was drawn according to the 19 century fashion of the eclectic, neo-styled gardens that were located next to the palace. This area of the garden is framed by the south wing of the palace, a pergola (which divides it from the baroque parterre) and the 19 century stables. The garden is open to the South giving a great view across a large picturesque park. The spatial composition of the garden was inspired by the Dutch Garden located in the Holland House estate in London (now part of Holland Park). The central part and main axis of the garden are underlined by a Neo-Renaissance fountain and the figure of an ancient winged Goddess Victoria. The flowerbeds and garden parterres were originally filled with a various plants from annuals, through roses and exotics such as orange trees and palms. Around 1920 the former owners of the Wilanów Palace – Branicki Family – started to plant more roses inside the box framed flowerbeds. As a result, a former eclectic flower garden transformed into the rose garden. First restoration works of the rose garden were done between 1945-1965. The second phase of restoration in 2009-2012 helped bring back the former glory of the 19 century design. Flowerbeds bordered with around 12,000 box bushes (Buxus sempervirens) trimmed as a low hedge frame around 5,000 roses and annual planting. Since 2015 the restoration process has been ongoing with respect to the variety of annual planting as well as reconstructing the 19 century decorations of this garden. 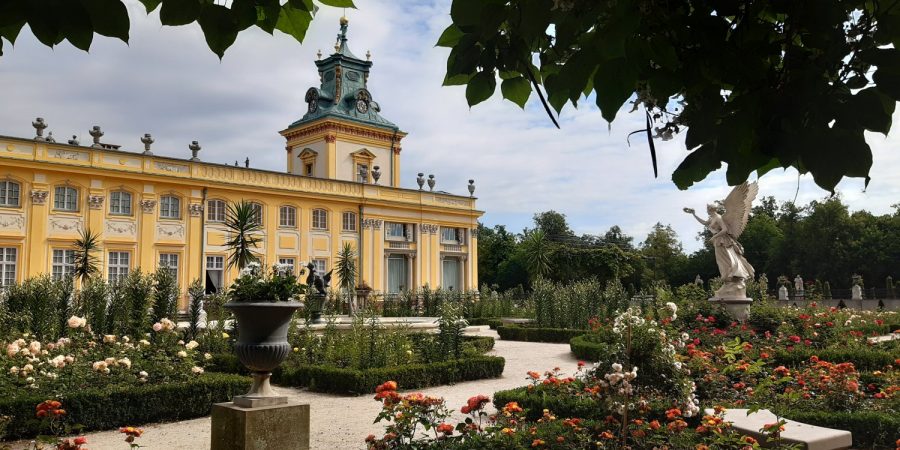 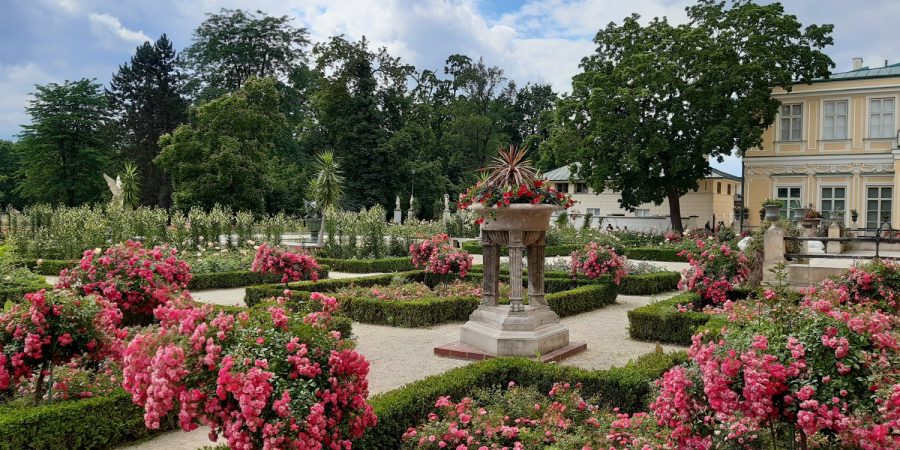 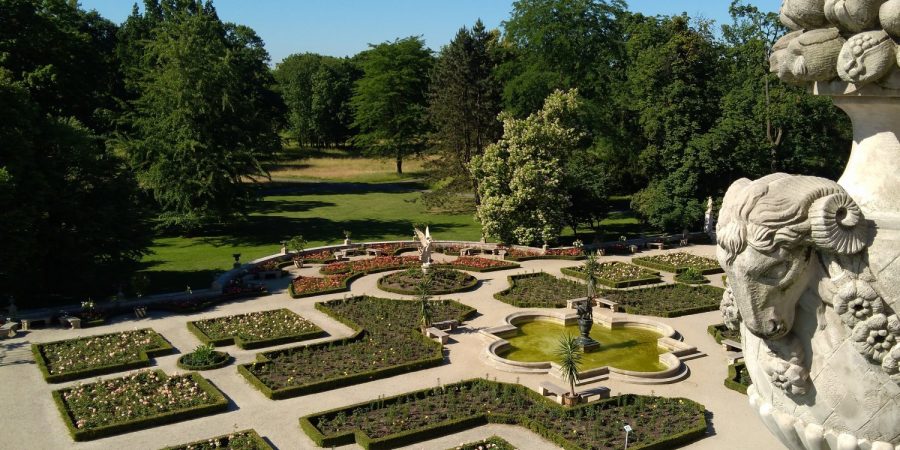 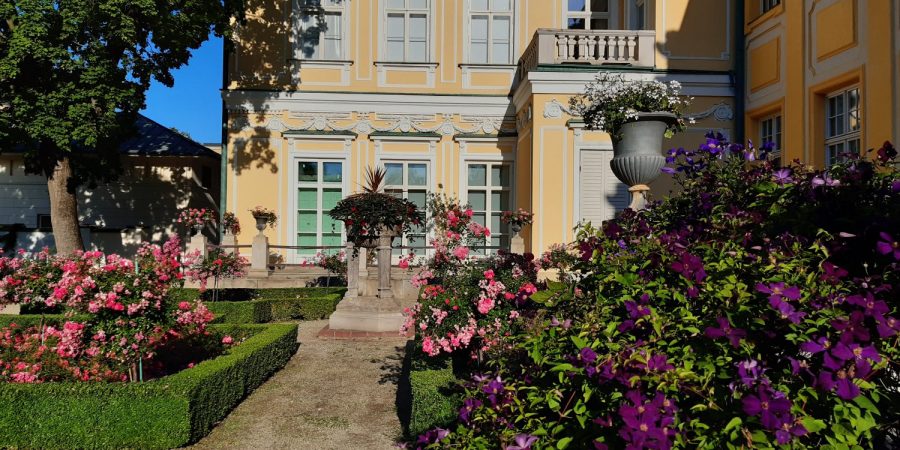 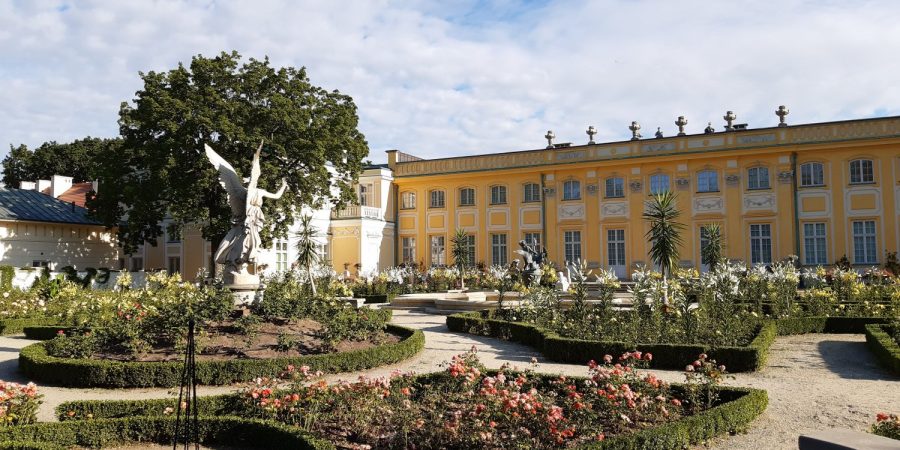 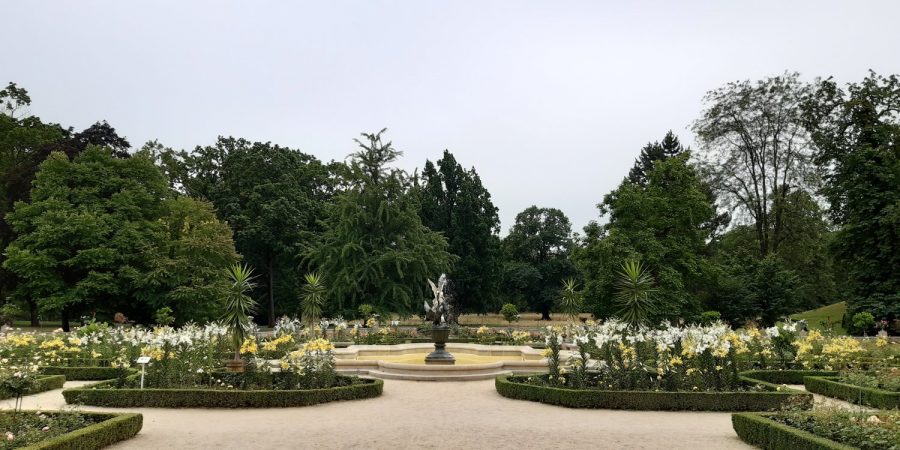 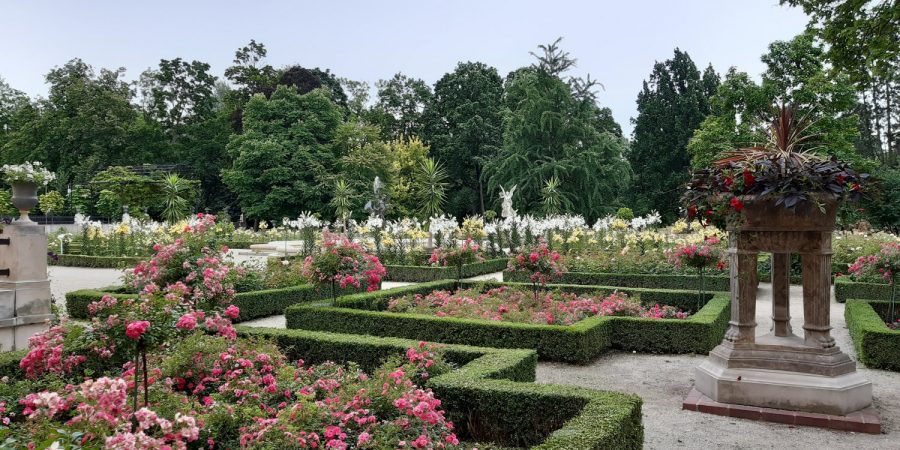 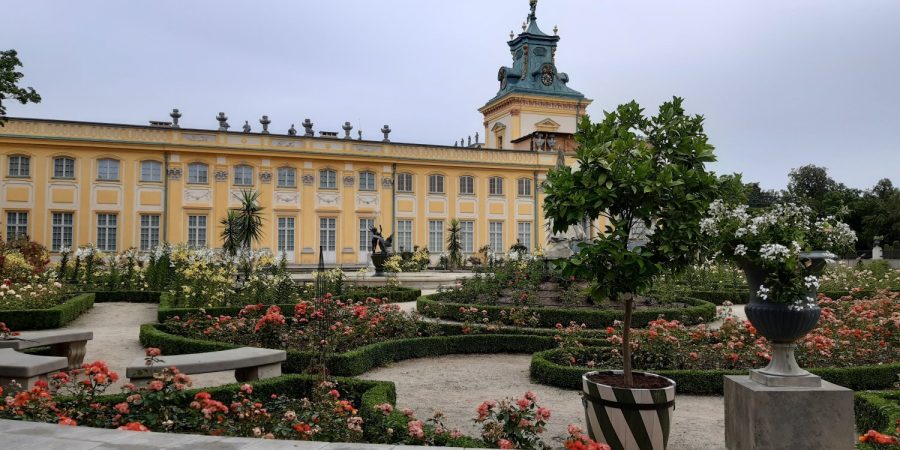 Box hedges (Buxus sempervirens), hornbeam (Carpinus betulus) hedges and berceau, yew (Taxus baccata) topiary build the structure of the eclectic Northern Garden (5,759 m2). Similar to the Neo-Renaissance Flower Garden it was restored between 1945-1965 and 2009-2012. The works done during the second restoration helped to keep its 19 century, gardenesque values. Box hedges frame the eclectic lawn parterres with flowerbeds, flower clumps and yew topiary.  Everything is kept in the pure gardenesque style that was used for the garden in the 19 century. The axial composition of this narrow part of the garden runs along one of five main axis that were developed around 1682-1684. The Northern Garden is spatially separated from the north with a hornbeam lane. Reconstructed in 2011, it is supposed to have the same height as the northern wing of the palace that separates the garden, together with a 19 century pergola from the south. The east of the garden is bordered with a hornbeam berceau that was reconstructed in 2018 according to the result of archeological excavations and information in archive documents. Since 2018 we are working on the reconstruction of the western part of the garden that was separated from the palace’s foreground with a rows of oak (Quercus robur) and linden (Tilia cordata) trees. This enchanting part of the Northern Garden is known as an Akademos Grove. The row of trees creates a curtain behind the 19 century “Bench of Whsipers”. Hopefully in 2020-2021 it will be possible to reconstruct an oak planting in front of the bench, including a round flower clump in the middle. 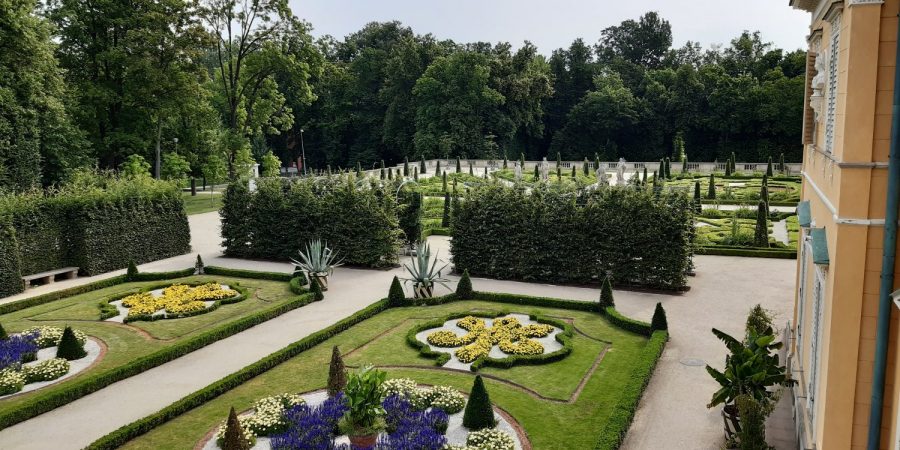 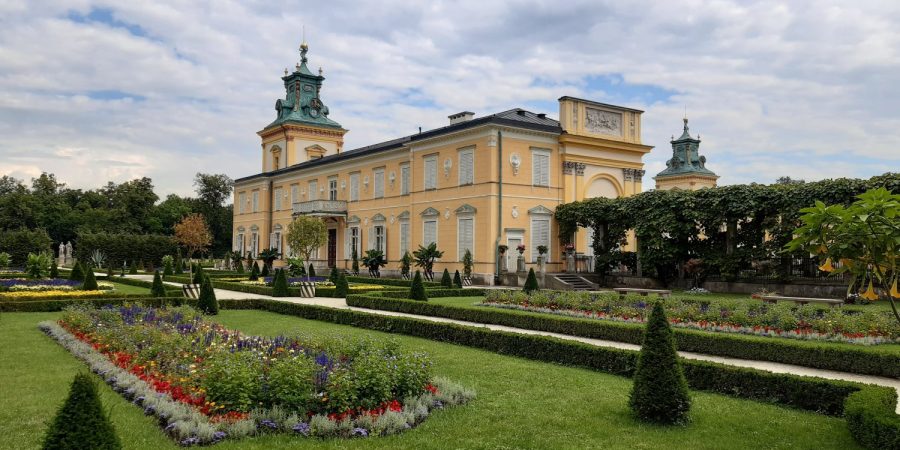 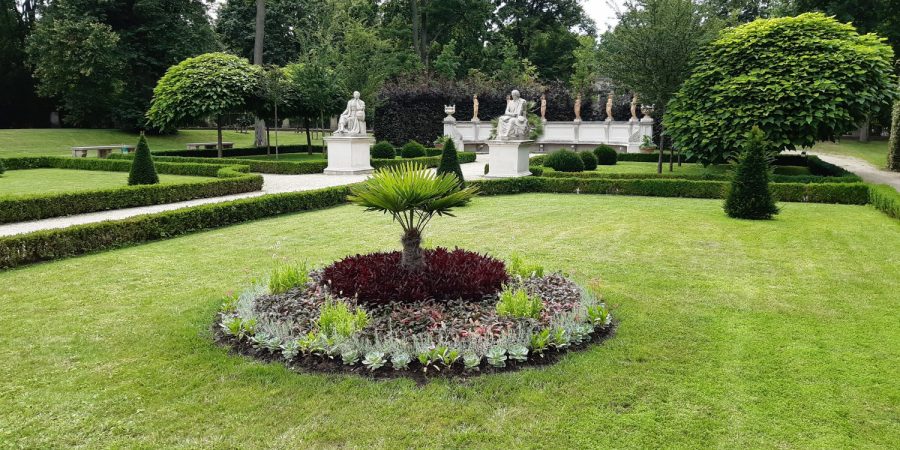 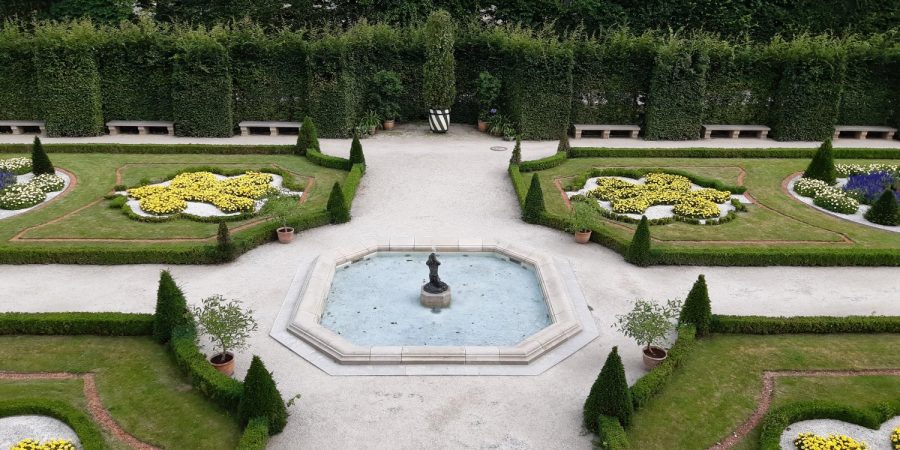 Soon we will share with you some materials about the current research of the historic forms of topiary at Wilanów that lead to a project, which started in 2017, to restore the bosquette.